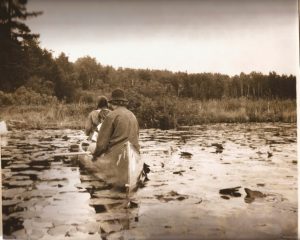 In the 60s, women couldn’t serve on a jury.  If you were pregnant, you could lose your job. As a high school student, you could be a cheerleader but not on a sports team. Imagine then, you are part of the first crew of women to attend an Outward Bound course in 1965. The tagline for the film states “It was tough. It was beautiful. It changed these girls… forever”

Women Outward Bound, tells the story of 24 young women from all over the country, from a mix of social classes, states and experience levels, who craved physical challenge, and to “do the things that the boys did.”  For some of them it was the first time out of the city, for others it was their first time away from home.

This film, by Maxine Davis, is a historical glimpse into MG-1 (Minnesota Girls- 1), the first all women’s Outward Bound course. Forty-seven years later, 10 of the 24 women who attended this course reunited to take a trip back to Voyageur Outward Bound School, the base is lovingly called Home Place in Minnesota, and reminisce about what they learned.

One of the most memorable parts of the film is its description of the womens’ solo, a part of course still present in Outward Bound programming (although pretty different today than what is described by the participants). These ladies were given three matches, one fishing hook, an empty tin can, a knife, and a small first aid kit. No food, no water bottle and no shelter. One reporter coined these essentials “implements of self-discovery.” 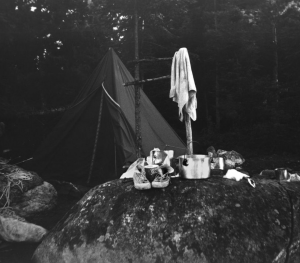 This film articulates self discovery as a key takeaway of the course.  This process of self discovery provided emotional foundations that affected their lives for the better. A few of the women attribute their confidence in the outdoors and love of nature to this first course. Others commented on the serenity of seclusion as a takeaway. One woman reflects on learning to be with others, depending on each other, and the impact one singular act of kindness can have.

The subject matter of the film initially avoided hardship and focused on the positives of the experience. It was only in the retrospective section of the film when the audience is able to hear just how difficult the trip was physically for most of the girls, and how much it fortified them as individuals.

Throughout the film we are constantly reminded by the narrator of the social theme that girls can’t do things boys can do, perhaps, to help us understand truly what it must have been like. This is done best through the cultural examples of the time. The advertisement of a woman in a house dress, heels, pearls and a vacuum cleaner flashes across the screen. The film articulates what messages were received by women in 1965 well. It’s hard to imagine these young women went against these norms to pursue a wilderness experience, something very much outside of what society expected from them.

Although the Vietnam War and the Civil Rights Movement were in the backdrop of this time period, the young women on MG- 1, appear in the film unaffected, embarking on an adventure which is potentially a missed opportunity for social commentary.  The political climate at the time was primed for discussion of social justice and hearing more depth in the memoirs of the narrators would have been a valuable addition to this film.  Though from varied background – some from cities, others rural areas – the film doesn’t address identities still excluded from programs like these and begs the question – When did Outward Bound have the first woman of color participant? Who was the first non-white instructor?

These are questions you won’t find answers to in this documentary style memoir. The audience is given a focused look at MG-1 and the opportunity to witness a heartfelt reunion. We encourage you to watch the film because it is powerful to note that it takes first steps, like this course, to spark her-storic change.

For more images and information about Women Outward Bound check out the film’s website at https://www.womenoutwardbound.com