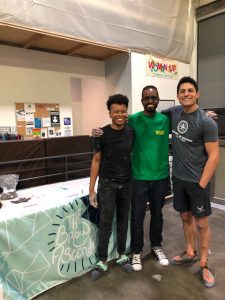 Seated on a bean bag, a couch arm, and a coffee table, the three of us huddled in the corner of the Dogpatch Bouldering Gym in San Francisco, one of the locations used for the twice monthly meetup of the Brown Ascenders. We sat closely, trying to optimize the acoustics of the corner as bodies scaled and people chattered under a steady stream of upbeat music that coated the space in encouragement. 25 people of color (P.O.C.) attended that evening – to mingle, climb, connect and build community. The interview started as any meeting of minds in the Outward Bound California world would – with a check in question:

AV – Can you please share the vision of Brown Ascenders?

Summer – It’s all about building a community for P.O.C. climbers. Darrick and I went to The Color the Crag Climbing Festival. I don’t think I thought hardcore about what it would be like to be in a space with that many black and brown people climbing because I had just gotten so used to not having that. So when we got back it was like, “Let’s do this thing! Let’s make it happen!”

First and foremost it’s about building community and a safe space for black and brown climbers, also being a jumping off point for people who may not have considered climbing because it may be something they don’t consider as culturally acceptable.

The second part is about representation and being visible. I love when there are a bunch of us and a brown kid is around too! The last piece is growth -growing together, getting strong together, improving technique.

Darrick – There isn’t a whole lot to add to what Summer said but the other piece is it’s about sharing something that we really love with other people. Especially helping other people of color getting into climbing, and hopefully being an inspiration for young people and seeing that representation in the gym as well.

In order not to assume an individual’s identity I thought it was best to just ask them how they prefer to identify, this can be one or two things of many. It was up to each of them.

AV – How do you self Identify in the world?: 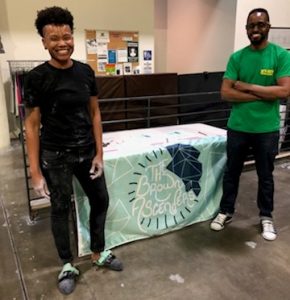 Darrick Broudy – An African – American male
Summer Winston – Queer, Black woman – Mixed race person
Both Darrick and Summer have demanding day jobs and Brown Ascenders is a project on the side. Both are educators and continually trying to bridge the two:

Darrick – is a high school Humanities and audio-Engineering/Production teacher. Darrick also works closely with his school on race, class, and gender to address diversity, equity, and inclusion.

Summer – A professor of graphic design. Branding is Summer’s specialty and she created the logo for Brown Ascenders

AV – Climbing is an act you both love- Can you share about when or why you started climbing and what keeps you climbing today?

Summer- I started climbing two years ago. Climbing feels really good. I like doing things that are challenging and hard. With climbing, as you get better, it gets harder which is a really nice overall way the act of climbing progresses. Not only do routes get harder but my body gets stronger & mentally I’m getting stronger. It’s a full body practice, both mentally and physically. I keep coming back because I am addicted to that feeling. Also, it works well with how my brain works. As a graphic designer and a human, I’m a problem-solving oriented person. Climbing is a puzzle, you are trying to figure out what is the best way for your body to work through the problem. I really love it. The community as well. Days I don’t feel like climbing, but I know my whole crew is going to be there. I go. And your crew makes a difference. You get strong together, you climb together. It’s important.

Darrick – I have been rock climbing 7 years or so and mountaineering on and off for 20 years. One of the things I love about both rock climbing and mountaineering is they both help me to be present. That is something I have a hard time with because I am always thinking about the future and thinking about the next, always running-running-running. When I am on a wall or a mountain, especially outside its one hand hold at a time, one foothold at a time, one swing at a time, one step at a time. It forces me to be present. I really like that. I also like being outside when you don’t have the sounds and distractions from civilization. You are with yourself. There is nothing like it. I like the act of pushing my body physically as far as I can. Also, the people I have met climbing are lifelong friends. Summer and I met through climbing. So that community piece is definitely big.

AV – February is considered Black History Month, What are your thoughts on that and how do you see that relating to the work you both are doing already with Brown Ascenders?

Summer – First of all, I carry a lot of anger when it comes to the concept of Black History Month. The fact that a Black History Month has to exist is a huge highlight of an overall problem. Black history isn’t something that is integrated into other histories and how society functions as a whole. The concept is problematic. And this essentially happens in climbing spaces. The idea that people don’t understand the necessity for Brown Ascenders. There exists a double edged sword – I carry anger about Black History Month and at the same time it brings awareness too. There is the good and the bad.

When we started Brown Ascenders there was kick back and people said we were creating a separation within the community. But really we need these spaces to exist. We are creating something where people like me exist and space where people can feel included and safe while doing something we love.

Darrick – I agree with Summer that the notion of Black History Month being an isolated attempt where we learn about black history, and then after that, it’s like “Okay, back to normal” is problematic. But I do really appreciate it as it’s an opportunity for black people to tell their own story and not the story that is narrated by textbooks or the media. It’s a way for us to recognize our way in the world. I see Brown Ascenders as an extension of that, this is a way for people of color to tell our own stories. You see all these outdoor companies who have shaped the narrative that only white people are seen in the outdoors that is sort of story that isn’t ours. Brown Ascenders, through all the events we host and plan to host, allows us to shape our own stories

Summer – It allows us to insert ourselves into the narrative.

In those short minutes, we went from getting to know each other to learn about each other, to relating. We were talking about life, about the true way that individuals experience the world and have stories that aren’t being shared. It’s time we share all stories, not just one month out of the year, but every day and without fail. This deepening of human connection continued as I asked the next question.

AV – If you could invite any person or people alive or dead to a Brown Ascender climbing Session who would it be and why?

Darrick – I have two people, one would be Malcolm X, I think he would be supportive of the Brown Ascenders, I can hear his voice saying “Well that’s a good thing you got their brother Darrick.” It would be interesting to talk to him about black history, issues of identity, the notion of black and brown folk telling their own stories.The second person, this is a little difficult, I had a former student who passed away climbing. His name was Chris Vale and we were supposed to go climbing before he passed and we didn’t.

We all took a few moments of silence for Darrick, for his loss, and for Chris, for the realities that climbing is amazing and also has very real consequences. As Summer said earlier as you get better, it gets harder.

Summer – Both of my people are alive, Kai Lightner and Emmanuel “Manny” Durima, they are awesome black boys doing their thing. I would want to invite them to a youth night with other brown and black kids. I would just want to climb with them and watch them on the wall. And spend time with these guys where this is a big part of their life. I’d want to invite them and have a kid’s night to spend time with these two awesome guys.

AV – What’s next for Brown Ascenders?

Summer – We are fairly new. This is our fourth meet up. We’ve had 40 people show up at most of the meetups. We met a manager of the Touchstone Gyms at a Color the Crag and she helped us get in touch for these to happen. Our goal is to have more gyms to host us. We offer a discount for day passes to climbers who join us. Our hope is to expand soon with people who want to spread these groups in their cities and states. We will continue to host twice a month. And come spring, there is a lot of camping, cooking, climbing. We asked folks what they want to do with the group and these are the things that came up. We want to be very community oriented. We can grow and support others to host events. Down the road, we may consider 501C3 non-profit status. We are open to non-climbing activities as well. We are trying to host an all P.O.C. after hours climbing party. We are trying to do it big, find sponsors and give awesome swag. People have expressed they would like to experience Brown Ascenders in an all POC space.

Darrick – To add to that, hopefully, we can expand to hosting at Planet Granite as well, and to get folks on the mountain, exposing them to mountaineering at some point. That won’t be happening this year, but mountain climbing, ice climbing, and trail running.

Darrick and Summer are a blast to climb with, they are both welcoming, thoughtful and their love for climbing and the outdoors shines through in the safe spaces they are creating. Having that crew and feeling of community is an access point that is invaluable to new climbers. Their heartfelt, honest answers only made it all that more exciting to have the chance to chat with them. Brown Ascenders has a bright future of stories to tell and climbing to be had. 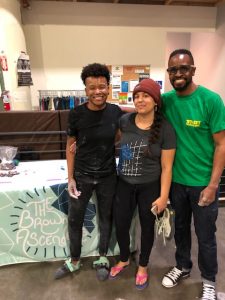