My Sophomore Year on the Bus

The Sierra Nevada mountains shifted out of our perspective as the Central Valley opened up and took in the car we sat in and our trailer towed behind. We were driving south. Soon, the inevitable Los Angeles traffic slowed our progress. Traffic– a part of the Service Bus, but that is not all it is.

What is the Service Bus? Like a number of my experiences with Outward Bound, it can be hard to explain. There is the “elevator speech”, the short, few sentences to say to people who ask.  It’s a four-week staff expedition, traveling around doing service projects. It’s not actually a bus, but a car and a trailer. This year we are visiting the Yosemite and Midpines area, Los Angeles, Red Rocks, Nevada, and Joshua Tree National Park.  We are trying to “walk the talk” of service, which is a component of Outward Bound.

But if you want more than just the 30-second blurb, well, that could take a while. It might not even be able to be digested and understood in the words I write or pictures I share.  This is my second time being a part of the Service Bus and I continue to struggle for the words, but I can tell you a story:

Late afternoon we arrive at Skid Row, a concentrated area for the homeless population in downtown Los Angeles. Tents line the street. We pull into the parking garage of Midnight Mission, an organization that helps homeless people through various services, education, and training. They also serve three meals a day to hundreds of people. Inside, we are greeted by a man named David. He takes us on a tour around the building and near the end he tells us his story. He speaks eloquently and evenly telling us how his drug and alcohol addiction left him homeless and estranged from his children. He stands here today clean and sober knowing his grandchildren because of Midnight Mission and the help that was given to him here. His words echo long after we leave.

Later, I stand behind the cafeteria line serving scoops of spaghetti to the men and women who walk through the doors. I try to smile at each of them as I watch the long line. By the end of the shift, I’ve gone through two huge vats of the noodle mix. I gaze out at the room filled with people who find themselves here through hundreds of different paths. I do not eat any of the food, but I choke on something. Maybe it’s my privilege, maybe it’s the desire to do more than scoop spaghetti. I want to learn the thousands of stories of the men and women who fill the long tables out in that room. There is not a way to know them all. If the stories were written down, it would take volumes and fill shelves.

This is the Service Bus, it is moments like the one in which we heard David’s story and we spent a few hours serving food. It is realizing those few hours do make a difference. It is a massive team building exercise between the staff that participates. It is practicing what we preach to our students about communication and teamwork. It is rooting around in plastic bins looking for the food items I need to make a communal dinner. It is eating picnics in parking lots out of the back of the car. It is climbing in Yosemite’s high country in November remembering how quickly the sun sets in late fall. 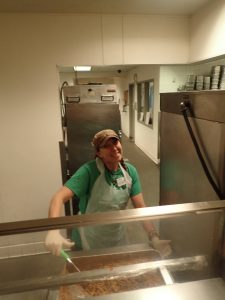 Last year I wrote down this quote before the trip and recently stumbled upon it; it resonates like a beautiful symphony. “Road trips are as essential as food. Leaving home is like cleaning the lenses of your sunglasses…habit settles over your life like dust and to see clearly again you must get up and go–break the routine.  It doesn’t matter whether your trip is good or bad–in fact, the best trips are the ones where you’re forced to cope with discomfort or difficulty because those teach you new ways to deal with the world. You come home wiser.”

That is the Service Bus. I left Skid Row and the Midnight Mission a little wiser and a better instructor that night and will be even more so when the bus stops rolling.