Love of Place Leads to Leap of Faith

Last fall, Coco Chen, Senior Food and Beverage Manager at Hilton, did something she never thought she’d do. She jumped off the 46th Floor of her office building, the Hilton San Francisco Union Square – in a dragon onesie. It’s the last thing you’d expect from someone who is scared of heights and loves her job, but her drive to give back to her community and push her personal limits to become a better person called her to leave that fear behind and take the leap! 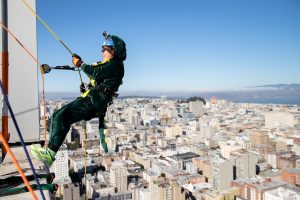 City Skyline Challenge is a fundraiser for Outward Bound California to provide scholarships and continue OBCA’s mission to support youth and communities through leadership programs. The skyline of San Francisco has a whole new meaning for those who rappel from the 46th Floor of the Hilton San Francisco Union Square.

Hilton Union Square has a special dedication to the community and wants to support local youth. They have been involved from the beginning of this event. Last year Coco’s manager sent an email asking for volunteers and fundraisers to support. Coco thought to herself, ‘Wow, that would be really cool to rappel off the Hilton, the company I work for in the building I work in, in the city I love.’ She emailed back and said she was in! She wasn’t exactly sure what she was “in” for or what she had to do, but she knew she could do it.

Over the weekend, she sent the fundraising link to her family and friends telling them what she was planning to do and letting them know how they could donate if they wanted to. Work was really busy that weekend so she didn’t look at it again until Monday. In those 48 hours with one email, Coco had raised more than $3000, well above the $1800 required.

Coco was encouraged by this and sent another email to a larger network – those who touched her life professionally, promising that their support would be matched in a legendary fashion on live broadcast. So that’s how the dragon onesie came to be – she couldn’t let down her supporters!

Coco attended high school in Hong Kong, where the importance of giving back was instilled in her, her school volunteered a lot in orphanages and beach clean ups. Hong Kong was also where she attended an Outward Bound course as a 12 year old and where she first tasted the fruit of a challenge met. That was the first time Coco remembers facing her fears. During that expedition, the crew woke up early, and the first thing they did was jump off a very high pier into very cold water and swim back to shore. As someone who was afraid of heights even then, it was a challenge for Coco, but also started her on the journey of realizing sometimes to move forward in life, you have to take that leap of faith. So in those early dawn mornings in Hong Kong, she jumped off the pier to the sound of her peers yelling her name and words of encouragement, while the instructors stood by for support, reminding her she could do it.

“I remind myself even now when I face a challenging experience in life or my career, I was a 12 year old kid that was able to jump off the pier into icy cold water at 4 in the morning, so there isn’t much that can stop me from conquering the world.”

Coco still battles her fear of heights and that crept in as she was standing at the top of the Hilton on a chilly day last fall, ready to go over the edge. It felt like fifteen minutes of self-negotiation, but was actually only 45 seconds. That’s all it took for Coco to say to herself that she’s got this, remembering that 12 year old jumping into the Hong Kong water with her peers cheering. Here she was again, with another Outward Bound adventure, about to jump. And her peers? They were still there – a little older this time as they sat in the City Scape Lounge sipping drinks and snapping iPhones photos of her through the glass. She had a special guest there too – her mom. So with their support and love, she took that leap and shimmied down the side of a super tall building in SF, with the Golden Gate Bridge to her right and Coit Tower behind her and facing those who cheered her on in City Scape. That fear lifted away about 10 floors down. 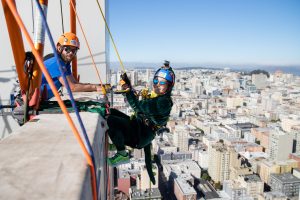 “Your biggest enemy is yourself, every step of the way. Regardless of what it is – a challenge or decision you need to make – if you don’t take the opportunity to try, you don’t know what the outcome will be.  More importantly, a quote that I live by is: ‘Don’t let anything hold you down, you are carefree and limitless. You will go places and adventures await and most importantly you are free.’

When I jumped off that ledge, it was the freest moment I have felt in a long time. Free from stress from work and myself, all the things that give me a headache, I had a breather and I had a different perspective. Until you try it, you don’t know how much it will impact you.”